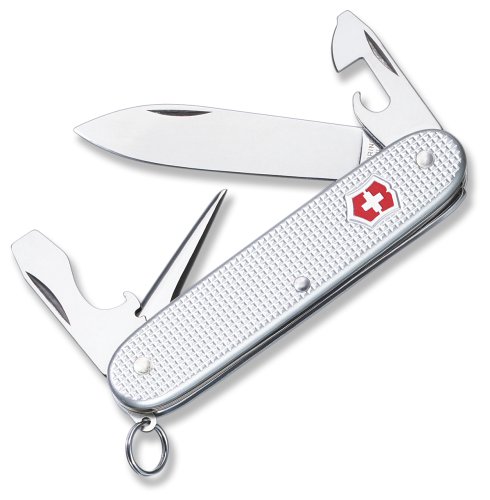 The Victorinox Swiss Army 53960 Pioneer has the following unique features: 1. Large Blade 2. Reamer 3. Can Opener with 4. Small Screwdriver 5. Bottle Opener with 6. Large Screwdriver 7. Wire Stripper 8. Key Ring In 1884, Master Cutler Karl Elsener started his cutlery factory in the small village of Ibach, Switzerland. In 1897, he crafted the Victorinox Original Swiss Army Knife. Since that time, the Elsener family has continued to craft tools in the Victorinox tradition of in genius design, durability, and quality. This is why all Victorinox multi-tools, made of first class stainless steel, are guaranteed a lifetime against defects in material and workmanship. REMEMBER, If it doesn't say Victorinox, it's not the Original Swiss Army Knife. From the renowned company that created the Swiss Army knife a century ago comes the Swiss Army Pioneer pocketknife, a compact multi-tool for hiking, camping, or around-the-house use. Measuring 3.5 inches long, the Pioneer is stylishly cased in a ribbed silver Alox housing with the familiar Victorinox logo on the side. More importantly, the unit contains several handy mini-tools, including a large blade, a can opener with a small screwdriver, a bottle opener with a large screwdriver, a wire stripper, a reamer, and a key ring. The Pioneer also includes an engraving panel on the back.

As with all Victorinox items, the Pioneer is made to exacting standards, with dozens of steps going into its construction. Victorinox attends to every detail, from selecting the finest materials to performing the final inspection. In addition, each individual tool has been hardened in a different way to stand up to its designated use. The Pioneer weighs 3.2 ounces and carries a lifetime warranty.

About Victorinox
In 1884, Swiss cutler Karl Elsener set up shop in Ibach-Schwyz, installing a waterwheel in Tobelbach Brook to run his grinding and polishing machines. Thus began what would become the international brand name Victorinox, a combination of Victoria, for Elsener's mother, and "inox," or stainless steel. Today, Victorinox produces watches, luggage, clothing, and, famously, Swiss Army Knives. The original product dates to 1897, when Elsener patented the Swiss Officer's and Sports Knife he supplied to the Swiss Army. Following World War II, American servicemen and women shopping in PX stores shortened the name to Swiss Army Knife, which lives on in English-speaking countries around the world and has become a metaphor for versatility.

At http://www.knivesshophq.ddns.info, finding the best Victorinox Swiss Army Pioneer Pocket Knife at a great price is easier than ever!

If you are not sure about the part number or want to know more about the Victorinox Swiss Army Pioneer Pocket Knife, Our products are available online and you can get more information concerning the products by visiting our website.